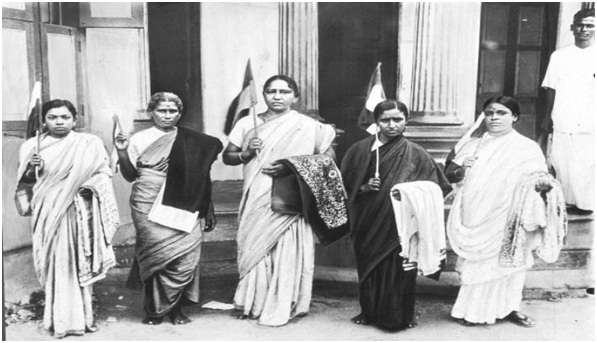 “When woman, whom we call abala, becomes sabala, all those who are helpless will become powerful.” Mahatma Gandhi said this while addressing the All India Women’s Conference in December 1936. The quote in itself substantiates Mahatma Gandhi`s belief in the contribution of the women in India`s freedom struggle. Had it not been for its women- their sacrifices and enlightenment, the salvation of India would not have been attained. The charge taken by women of India will always hold the central place in the independence struggle. The participation of women was not limited to one kind of action, for example, the non-savage Satyagraha Movement. A large number of women committed their lives for acquiring freedom of their homelands from all strata of the society. Barring a few often repeated names like Rani Laxmi Bai, Sarojini Naidu or Annie Besant, the contribution of many women from small regions and hinterlands of India to the independence struggle has received less to no attention over the years. The voices of these brave female leaders who were imminent in stirring patriotism in the nooks and corners of India have not found a place in our history books. It is time we remember these Indian female brave-hearts, an equally significant pillar of our freedom movement and bring their faces out of the shadows.

While most female freedom fighters that have been recognized belonged to elite or middle class background, their numbers are only a handful. There were a number of ordinary faces, from humble backdrops, conservative households and with no formal education, who battled the British Raj, gave selfless sacrifices and even laid their lives to see their nation independent and flourishing. One such forgotten female whose contribution has been neglected was Mrs. Tara Rani Srivastava. Born into a humble family of Bihar, in the district of Saran, she was passionate about the independence struggle from quiet a young age. She was married at the age of 13 years to a freedom fighter Phulendu Babu but marriage did not deter her patriotic sentiments. Her husband was an active participant in Mahatma Gandhi`s Quit India Movement. Tara Rani`s patriotic fervor only fueled with each passing day after marriage and she did not care about the traditional society that she was an inhabitant of. At a time when women did not step out of the house, she gathered like- minded women to educate them about Gandhiji`s independence struggle. She galvanized women from her surrounding villages and motivated them to rise in protest against the British rule. Tara Rani emerged as a motivation for the women belonging to rural backgrounds and inspired them to participate in the Quit India Movement.

Her exemplary courage and dedicated patriotism was highlighted by an incident which raised her statute from ordinary women to a freedom fighter that should be given the due credit. On August 12th 1942, Mahatma Gandhi called upon to hoist the national flag on the roof of Siwan`s police station. Phulendu Babu assembled a massive crowd of men and women to hoist the national flag and standing shoulder to shoulder with him was his wife Tara Rani Srivastava. The couple not long after marriage stood like rocks in the front of the crowd against the British administration and marched forward filled with the love for their motherland. Their motive was to assert the power of a unified India against the British by hoisting the national flag on the roof of the police station. Raising anti-British Raj slogans they proceeded towards the Saran police station with the tricolor in the hands of Tara Rani and a huge crowd of both and men and women behind them.  The police in order to contain the demonstration resorted to lathi charge on the protesting crowd. But the agitation only gained momentum under the administration’s brutality and when the protesters became uncontrollable the police opened fired upon them. Phulendu Babu soon fell to police bullets but Tara Rani was dauntless. She did the unthinkable, not only bandaged her husband`s wound but continued to march on towards the police station with the national flag in her hands. Such was her dedication towards the independence struggle that she made freedom of her country her sole motive in life. By the time she returned, her husband had succumbed to the police bullets and passed away. Being newly married women of a young age and belonging to a conservative society she should have adhered to the rules of matrimony and died to protect her husband. Instead, the spirit of patriotism so ran in her veins that she chose the independence of her country over her matrimony.

Tara Rani kept her composure and remained placid on seeing her husband dead. A prayer meeting was organized in her husband`s honor on 15th August in 1942 in Chhapra (Bihar). She understood that her husband had sacrificed his life for the greater cause of the nation. Her patriotism did not die with her husband as many would have expected from a woman in her times. Instead, her resolve strengthened all the more. She was not the one to be bound in the shackles of traditions and customs of the rigid society. She knew the hardships of a widow`s life yet she continued actively in the freedom struggle despite all the obstacles until independence on August 15th 1947. At a time when women were denied basic rights and preferred to stay inside the four walls, Tara Rani kept on inspiring and motivating the women to join in the independence struggle and made them realize the importance of their role.

Whether women like Tara Rani Srivastava can be considered as revolutionary or not, there`s no denying the fact that they fought against great personal odds for the freedom of the country. Tara Rani is just one among many such female freedom fighters who have displayed great resolve despite seeing the losses of their closest ones. Tara Rani is a forgotten and an unsung hero of the Indian freedom struggle belonging to a small region of a state (Bihar) which actually  was the foreground of Mahatma Gandhi`s independence movement. Although, to many her contributions may seem unsubstantial, looking from a female`s point of view; marching of a young bride with the tricolor in hand, leaving a wounded husband on ground depicted commendable resolve to the cause of freedom. A woman born in a poor family with no proper education and married at the tender age of 13, her not letting her personal loss come in the way of her duty for the nation made her an inspiration and role model to many such women of her community and area. It is indeed unfortunate that freedom strugglers like Tara Rani Srivastava have been lost in the shadows of time and remained unsung. This unsung female warrior should be celebrated no less than other freedom fighters.