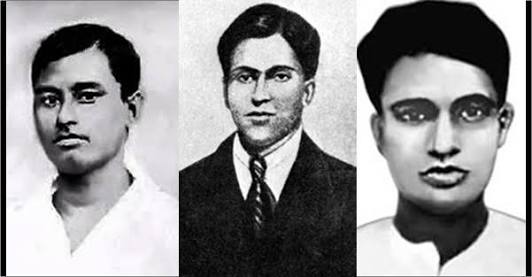 The Indian freedom struggle movement is inundated with tales of bravery and heroism. Reeling under the stringent British Raj, thousands of Indians from varying walks of life, spanning over two centuries, joined forces as and when the situation demanded. Some fought back with rebellious literature inciting violence in the hearts of the young, while others directly took to firearms to avenge their fellow countrymen. This article is about three such valiant teenage boys from Bengal who went down in history for the famous ‘Corridor Warfare’.

Benoy Krishna Basu was the eldest, being born in September, 1908 while Badal Gupta and Dinesh Gupta were born in 1912 and 1911 respectively. All three hailed from Munshiganj district in Bengal (now in Bangladesh). They had joined Bengal Volunteers, a clandestine revolutionary group organised under the leadership of Netaji Subhash Chandra Bose in 1928. Very soon after coming into operation, the Bengal Volunteers took it upon themselves to execute British officials known for their atrocious treatment of Indians under the banner ‘Operation Freedom’.

The organisation took an active step in this direction on 29th August, 1930 when it had targeted Lowman, the then Inspector General of Police, who had made himself infamous for killing innocent Indians. Benoy Basu donned casual traditional Bengali attire and entered Medical School Hospital, where Lowman was supposed to visit a fellow ailing policeman. Basu breached security and opened fire on his target, maiming and killing him in seconds and critically injuring another.The assassination led to a manhunt for Basu, but he was always adept in evading capture.

Badal and Dinesh Gupta were drawn to the freedom movement through various influences early in their lives. For Badal Gupta, it was filial. His paternal uncles Dharaninath Gupta and Nagendranath Gupta had been involved in the Alipore Bomb Case and were imprisoned along with Rishi Aurobindo Ghosh. For a young Badal, this was a realization and a calling to join forces with like-minded revolutionaries against the British Administration. First, he was involved in the destruction work of the British armoury. He was an active participant when the Bengal Volunteers captured the entire communications of British police including telephone and telegraph services.

Dinesh Gupta, who had also joined the organization in 1928, initially took over the training of local revolutionaries in Midnapore district of West Bengal in the use of firearms. Revolutionaries trained by him were responsible for the assassination of,inter alia, three District Magistrates: Douglas, Burge and Peddy.

Following the apparent “success” of the first such mission, the group decided to concentrate on their next attack to be carried out in December of the same year. This time the association targeted Colonel N. S. Simpson, who had become quite infamous for the brutal oppression of Indian prisoners. However, the trio decided not only to assassinate Simpson but also to attack the secretariat building in the Dalhousie Square in Calcutta- Writers’ Building so as to strike fear in the hearts of other British officials.

On December 8, 1930, Benoy, Badal and Dinesh clad themselves in European outfits to escape initial suspicion and entered the Writers’ Building. They shot Simpson, who succumbed to his injuries on the spot and went on to injure many others in the gunfight that ensued. Finally they were overpowered in the second floor corridor. They refused to be captured by British officials and had their own pre-determined ways to end their life to elude being taken as prisoners.

Badal Gupta took potassium cyanide while Benoy and Dinesh shot themselves. While Benoy survived his suicide attempt initially, he died on 13th December, 1930 in the hospital. Dinesh, unfortunately, survived. He was convicted for anti-governmental activities and sentenced to death. During his imprisonment in Alipore Jail, Calcutta, he wrote numerous letters to his family on the bravery of revolutionaries and his great belief in self-sacrifice for the greater good.  Below is a copy of one of his letters written to his brother from prison:

After independence, Dalhousie Square, Calcutta was renamed ‘B.B. D. Bagh’ in the honour of the daring trio. Though they were termed as “terrorists” in numerous newspapers of the time, their acts of bravery have been emulated subsequently and they have been labelled as martyrs ever since. This essay is a small tribute to them on this Independence Day.