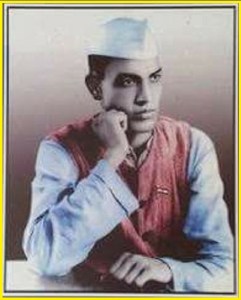 The India of pre-Independence days was an amalgamation of several princely states. The rulers (the Maharajas, Rajas and Nawabs) of these states in coalition with the British government ruled their subjects with great impunity. One of such princely states was the erstwhile kingdom of Garhwal, the present day Garhwal division of the state of Uttarakhand. Such was the dominion of the Garhwal Naresh that he was considered as an incarnation of Lord Badrinath himself. The ruler was considered Bolanda Badri, the voice of God on earth. The Garhwal Naresh levied several taxes on the poor public of Garhwal while he spent his days merry making with the British officials or touring Europe. The condition of the public was abysmal. The difficult geography clubbed with the atrocities of the Naresh made life a living nightmare for the modest residents of Garhwal.

Under such circumstances, Shridutt Badoni, later known as Shri Dev Suman, was born to Tara Devi and Pt. Hariram Badoni in Jaul gaon of Tehri Garhwal on 25th of May in 1915. Shri Dev Suman had a tough childhood. His father, a vaidya passed away of cholera when Suman was a little boy of age three. A brilliant student throughout, Suman received his primary education in a nearby local town of Chambakhal. Suman had a deep attachment to his motherland. He knew the importance of freedom, dignity and considered speaking up against tyranny his duty. Such was his dedication to his cause that when Suman was a kid of mere 14 years, he was first jailed for starting a satyagraha on call of Mahatma Gandhi in 1930.

Suman was giving hope to the people of Garhwal. They believed Suman can help them get rid of the despot. The hilly people for whom information about the rest of the world was rare and scarce would gather around and listen patiently to him while he explained to them how the struggle of Independence was going on in full swing outside the hills. The Naresh, afraid of the rising awareness amongst people tried to lure Suman to work for him. In 1937, he called Suman to his palace in Narendranagar and offered him to work as his representative. Suman flatly refused the offer. He protested,

“I can not hold my future to ransom for a few pieces of silver.”

Later in ‘37 he moved to Delhi and started Gad Desh Sewa Sangh to bring the plight of Garhwali people to focus in national discourse. While working for weekly publication Dharm Rajya he published his first anthology Suman Saurabh. Next year Suman got back to Garhwal and got married to Vinaylakshmi. In 1938 Suman toured the hills of Garhwal but the widespread poverty, lack of food and the dreadful condition of people made him realize that nothing short of a civil uprising can stop the Naresh from his tortures. Suman believed the condition of the common public of mainland India was akin to a slave but the people of princely states like Tehri were slaves to slaves of the British Government. Hence, Suman laid the stones of Tehri Rajya Praja Mandal in Dehradun on 23rd January of next year. Subsequently, Suman incurred the wrath of tyrannical Naresh. Suman was frequently put behind bars in jails of Dehradun, Tehri and Agra. However, courageous Suman was becoming popular among the Indian revolutionaries. He was appointed as representative of himalayan states in Akhil Bhartiya Desi Rajya Lok Parishad, an organisation of revolutionaries raising voice against the princely states.

In a public meeting in Ludhiana Suman described the plight of people of Tehri:

“The condition of the people of Tehri is so appalling that neither they can cry about it nor can share it with anyone. Levying taxes outali, gayali, muyali, den-khen, pauntuti, sauni ser, chutt, tuli patha, rakam, ghat, paal, vishau, kuli uttrayan, choti bardaish, badi bardaish, prabhu seva are a means to maximise the exploitation of common public. The people of Tehri are living a life worse than that of animals!”

The king of Garhwal was frightened by Suman’s rebellion. He passed a “Registration of Associations Act” which forbade the formation of any democratic organisation in the Tehri kingdom. This was done to declare Tehri Rajya Praja Mandal as an illegal organisation. Suman revolted against the unjust rule. He tried to organise protests against it but was stopped by the kingdom officials. In 1942 he aligned his struggle in Tehri with the broader civil disobedience of the Quit India movement called by Gandhiji. The Quit India movement gave a boost to revolutionaries like Suman who were fighting a dual fight against the British and the unjust rulers. They started witnessing the fruits of their labour. In September of 1942, Suman tried to enter Tehri to address a rally but he was arrested and sent to Agra Jail. Just after his release from Agra Jail, he tried again to enter Tehri in December. This time he was arrested and thrown into the jail of Tehri on 30th of December. The conditions of Tehri jail were harrowing. Suman was not provided even basic life necessities. Suman declared since he was a political prisoner, he should be given the rights of one. He started his first hunger strike of seven days which granted him the status of a political prisoner and he was provided basic necessities. The king fearing public discontent on illegal detention of Suman wanted to initiate a public court case as a pretence. The spies of the king visited Suman’s home and collected his articles as alleged proof of Suman’s conspiracy against the king. Suman was charged under 124(A) Tehri Rajya Dand Sangraha where he was accused of promoting enmity, hatred and sedition against the king. His association Tehri Rajya Praja Mandal was declared illegal and all the acts under its banner were termed seditious. Few sycophants of the king gave false testimonies against Suman. Suman resisted against the travesty of injustice and declared that all accusations against him were false. On 31st January of 1944 Suman was declared guilty by the court of Judge Ramraj Singh. He was fined a sum of 200 rupees and 2 years in prison. Suman refused to tender an apology for his act. Hence, Suman was thrown into the dark barracks where he was stripped and beaten black and blue. He was forced to sleep on naked floor in the bone chilling winters of Tehri. He was forced to feed on chapatis laced with manure and shredded glass. Even in jail, Suman could not forget the plight of the common folk of his motherland. From jail he wrote a letter to the king demanding rights. In his letter, few of the rights he asked for were:

READ  JNU : ABVP protested for hostel allotment at the Dean of students Office

Suman started a hunger strike again. The jailor of Tehri Mor Singh increased his atrocities on Suman. To break the hunger strike, pipes were forced down his food pipe and nose from which the jailor would pour milk. Suman was bounded in fetters each weighing 35 kilograms. Injections of unknown drugs were thrust in his body which would lead him crying for water for days. On the 84th day of his hunger strike, the son of mother India could not fight any more. On the night of 25 July, 1944 at a young age of just 29 years Shri Dev Suman passed away. The immoral king got Suman’s body sewn in a sack and disposed of his body in the Bhilangana river in the dark night. One splash and the son went back into the laps of Mother India!

The death of Suman rocked the kingdom and saw major protests and demonstrations against the king. Ultimately, the kingdom of Tehri was annexed into the Republic of India in 1949.

Today, the state of Uttarakhand remembers his tribute to Shri Dev Suman on his death anniversary every year. As a sign of respect, one of the biggest universities in Uttarakhand is named after him. Suman remains one of the most respected freedom fighters in the hilly state. Once Suman’s mother asked him, “You always come and ask for money from me. When will you earn for me?” Suman, with tears in his eyes replied, “Maa you have two sons exclusively for you. Let me be a son for those mothers who do not have anyone!” Such was the grandeur of Shri Dev Suman. His life remains a constant source of inspiration for many other sons of Maa Bharti.