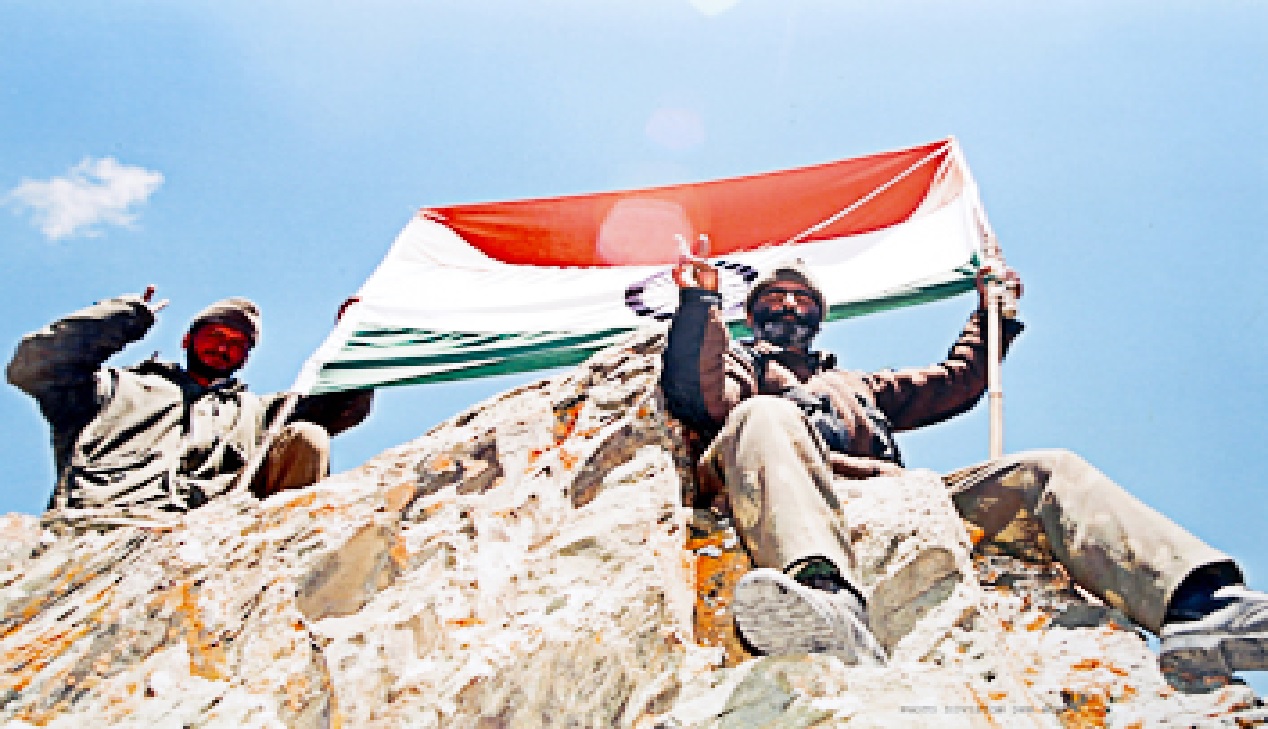 The year 1999 (May to July) saw India fight a Limited War with Pakistan in the Kargil region of Drass Sector. Popularly known as the Kargil War or Operation Vijay, it saw many young brave heart soldiers fight bravely to dislodge the enemy, strategically perched on snow-peaked mountains. In maneuvering the hostile terrain and scaling steep cliffs to reach the enemy posts, many had to make the ultimate sacrifice of laying down their lives in the line of duty, to protect their Motherland. Kargil saw the biggest casualty and loss of commissioned officers in any combat in the history of Independent India. About 530 Officers lost their lives and almost double that number were injured in the War. As a mark of respect, the Nation bestowed numerous military honours to the brave soldiers like PVC, MVC, VC, SC. The highest military honour of the land , the Param Vir Chakra, which was established on 26th January 1950 was given to 4 deserving heroes, who’s brief biography we will study in this article.

Born in Sitapur Uttar Pradesh, he was the eldest child of a middle class family. He was an avid sportsman since childhood. Fired by the zeal to serve his Motherland, he joined NDA. After graduating from NDA, he joined the Gorkha Rifles. He was destined to win the PVC as he mentioned in his Service Selection Board (SSB) interview during the course of his Entrance Examination for the NDA that he wanted to join the Army to win the PVC. Posted in Kargil during the War, Captain Pandey was assigned the task of clearing the strategic, Jubar Top. On the night of 23rd July, he along with his platoon, waged an attack to clear Jubar Top. While still on a narrow ledge, they were attacked by the enemy forces. Instead of turning back, he showed exceptional courage and encouraged his men with a loud battle cry and charged on the enemy. He killed two enemy soldiers in a hand combat and went on to capture the point. However, due to critical bullet wounds, he laid down his life in the line of duty.

Born into a humble middle class family in Palampur, Himachal Pradesh, Vikram Batra made it to the Indian Military Academy (IMA), Dehradun in 1996 at the young age of 22. Commissioned in the Jammu and Kashmir Rifles, he was sent from sub sectors of Drass and Batalik to capture the important peak point 5140. Nicknamed Sher Shah, he along with his Delta Company decided a surprise attack on the enemy from the rear. As they approached the top of the steep cliff, the enemy noticed their movement and started heavy firing from the peak top on them. Despite the imminent danger to life, his battalion kept moving ahead under his able guidance from the front. They destroyed the enemy machine gun post by hurling grenades. Despite being grievously injured he inspired his team to victory. Point 5140 was captured at 3.30am on 20th June. But a braveheart laid down his life in the process. In recognition of his courage in the face of death, Captain Vikram Batra was honoured with the Highest Gallantry Award, the PVC posthumously.

Hailing from Buland Shahar District of Uttar Pradesh, he served in the 18 Grenadiers regiment. His platoon was part of the Ghatak Task Force that was given the mission of capturing three bunkers on Tiger Hill. On the morning of 4th July, 1999 at the height of 16,500 feet, the platoon was to reach the top of a snow covered mountain. He volunteered to fix the rope for the soldiers to reach the top. While accomplishing his task, he was fired upon by machine guns and rockets and sustained bullet wounds on his groin and shoulder. Despite the injuries, he reached the top and killed four Pakistani soldiers in a hand combat and put an end to the machine gun fire. His exemplary grit and determination inspired his fellowmen to wage a victorious war in an extremely critical situation.

Born in Bilaspur, Himachal Pradesh, Sanjay Kumar joined the Jammu and Kashmir Rifles and was posted in the region at the time of Kargil War. He was given the task of capturing Area Flat Top of Point 4875 in the Mushkoh Valley on 4th July, 1999. After reaching the top of the cliff, they were faced with fire from a machine gun only 150 metres away. Assessing the danger, he crawled up the ledge and charged towards a bunker all alone. He was hit in the chest and forearm and started bleeding profusely yet he did not stop or give up. He managed to kill three soldiers in hand combat and 4 more in a second bunker by firing at them with his machine gun. His act of bravery inspired his platoon, to capture Area Flat top.