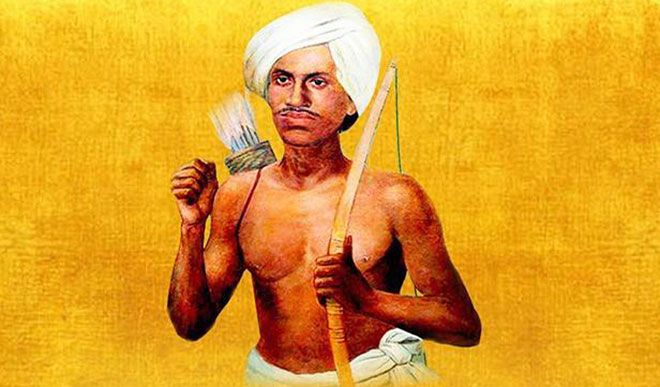 There have been many iconic personalities India has produced during her fight for freedom, but among all, merely at the age of 25, Birsa Munda gained such a legendary status for the tribal community that His followers, popularly known as ‘Birsaities’, started revering and calling Him as ‘Bhagwan’ (Hindu Noun for ‘God’). Hailing from a non-controversial and non-combative Munda tribe, His activism, spearheading the ‘Ulgulan’ movement against the British Colonial rule, finds few parallels in the history of Indian Freedom struggle. In 1895, Bhagwan Birsa Munda single handedly gathered and rallied about 6000 Munda tribal combats which at the time was the largest congregation of Tribal guerrilla warriors against Britishers in the area which is now known as Jharkhand. It was His struggle against the exploitation of tribals by the British government that prepared the ground for passing of the Chotanagpur Tenancy Act in 1908, about 8 years after his pre-mature death in a British prison cell, which restricted the transfer of tribal lands to non-tribals. It is worth mentioning that Birsa Munda is the only tribal leader whose portrait dons the Indian Parliament.

His legends and stories of his heroic struggle can take up the entire space, if listed out, and are possibly not hidden from those who have closely followed the Indian Freedom Movement, yet only a few have evidently witnessed the attempts of Christian Missionaries and Left wing extremists such as Maoists and their urban counterparts known as ‘Urban Naxals’ to gradually hijack the unique identity of Birsa Munda. The transformation of Bhagwan Birsa Munda from ‘Dharti Baba[1]’ to ‘Dharti Abba[2]’ is perplexing. Christian Missionaries have throughout alluded to the fact that Birsa Munda converted to Christianity when He joined a German Christian Mission school and that He was renamed as Birsa David. In an open letter to Raghubar Das, BJP Leader and Former Chief Minister of Jharkhand, published in National Herald[3]– a Congress mouthpiece- A J Philips- President of a Delhi based NGO Deepalaya- argues that Birsa Munda benefitted from his contacts with Christian Missionaries and it was the education that Birsa received from Christian mission school that made him aware of his rights. In the same letter, Mr Philips puts forth a question which I am quoting here, ‘Do you know that Christians were in the forefront against British who fiddled with the rights of the aborigines?’

In the entirety of arguments, both Christian missionaries and Mr Philips conveniently omit the fact that Birsa Munda had to convert to Christianity in order to find admission into the German school as it was made a prerequisite qualification for admission into such Christian schools of that time. They also deliberately fail to mention that Bhagwan Birsa Munda later decided to withdraw from the Christian school with moral support from His father and became follower of a Vaishnav monk, from whom He took lessons of Hindu religion and the old scriptures along with the Ramayana and Mahabharata. Based on these Hindu religious teachings, Bhagwan Birsa Munda started the faith of ‘Birsait’ which Christian missionaries assessed as a potent threat as it drew tribals away and into a devotional Hindu sect. While Mr Philips agrees that Birsa Munda, later in life, turned against Missionaries, he fails, perhaps wilfully, to explain the reasons. It is perhaps worthwhile to remember that Birsa movement was such a grand success because of a cumulative response that it offered to the disintegrative forces of the Church which wrought onto Tribal people, in conjunction with the Colonial suppression, a great disorder and a rupture from their tribal life. The ‘Ulgulan’[4] movement or ‘The Great Tumult’ of Bhagwan Birsa Munda is in fact akin to many Hindu devotional sects such as ‘Shiv Charcha’, a Hindu nocturnal gathering for Hindu God ‘Lord Shiva’, present in both Maoist stronghold plateau forests and non- Maoist agricultural plains in the Chotanagpur plateau of Eastern India. Like today’s ‘Shiv Charcha’ which- despite threats from Maoist insurgents- is rapidly spreading in Naxal hit areas of Jharkhand, Birsa Munda led a devotional movement which helped tribals reorder and reintegrate against the fragmentation brought about in their lives by both the Christian Missionaries & the British rule.

The ultra left is not very away from the missionaries in highjacking the identity of Bhagwan Birsa Munda and using it according to their own convenience.
Although Maoists consider Birsa’s Movement as their historical antecedent, they dismiss the devotional aspect of it as ‘religious’ and as ‘an opium of the people’.

In the reforms that Birsa Munda brought about in the tribal society, in His pressing on the importance of prayers, staying away from alcohol, following a code of conduct and His advocacy for the abolishment of witchcraft, one can easily see the traces of reformist Hindu teachings that He received. The impression of Hindu teachings over Birsa Munda was so profound that it changed the most intimate of his daily bodily practices. Birsa Munda gave up meat, started worshipping the Tulsi plant and wearing the sacred thread which- by the way- he carried until his martyrdom  on June 9, 1900.

India’s Pagan civilisation has witnessed a constant battering through means of inculturation by invading forces of Abrahamic religions and Maoism since ages. Through the course of these effots, the role of many leaders of Indian Freedom Struggle have been forgotten. Those who are still remembered, narratives have been and are being built to either hijack their identity or present them with half baked truths so that their agenda of uprooting the Pagan identity of Indian religious systems can continue. Through a mix of such overt campaigns by Maoists and covert modus operandi of the Church, the innocent gullible tribal people of India have been and continue to be duped off of their land, their culture, traditions, history and their way of life. This perhaps warrants the need to quote Desmond Tutu, “When the missionaries came to Africa they had the Bible and we had the land. They said ‘Let us pray.’ We closed our eyes. When we opened them we had the Bible and they had the land.”

[4] means ‘revolution’ in the Mundari language spoken by the Munda tribe.

Post Views: 2,360
छात्रशक्ति नवंबर 2020
Exploring the unexplored: The Cultural and Religious dimension of a Tribal Community