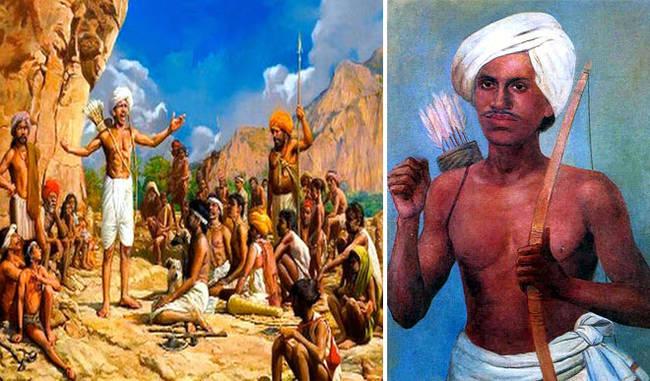 Tribal culture and religion
People having little exposure to the tribal culture usually have many prior fixations and presuppositions about their culture. Such theorization devoid of practical experience can only lead to half-baked knowledge and if there is a genuine attempt to understand someone, they must be understood on their own terms. While the great range of diversity among tribal cultures in India makes a general description almost impossible, my own experience with the tribal community in the tribal heartland of Jhabua, Madhya Pradesh makes it possible for me to present an image of a representative tribal cultures from which a general idea about the natural essence of a tribal community can be seen.

In the villages of Jhabua, I saw a simple and yet a pretty rich kind of life that is hard to come by not only in the big cities, but even in the villages of the plains – people living in a state of communion with nature and a general state of harmony with the world. It’s not like modern technology has not reached Jhabua or that people living here don’t travel around. Far from it, most forms of technology have been put to good use here. But in ways I do not understand, people seem to have resisted taking up many other intrusions that increased use of technology and a more comfortable lifestyle leads naturally to. Some of it might have to do with the nature of faith here. The tribal people practice Sanatan dharma in the truest and keenest sense of the term – they have nature at the centre of their worship.

A vast majority of the population in Jhabua is tribal and rural. Three tribes – Bhil, Bhilaliya and Pateliya make up the tribal population. These tribes generally live in the same village along with some other castes including harijans. The villages in Jhabua do not resemble a village of the plains. Rather, both in their topology and the sparse distribution of population in small clusters all over, these villages remind one of the villages in the hill states. Due to this sparsity, very often what the government recognizes as a gram panchayat is made up of two to four different local villages. People do not live in mohalla like arrangements. Individual houses are surrounded by huge strips of land. Some people have large portions of their farmland adjoining their own homes. The average landholding is quite large.

Regarding the matter of marriage, the general Hindu culture of clan endogamy is practiced and marriages are arranged at a quite early age. The practice of dowry is also observed but it’s the bridegroom’s side that has to pay the bride’s family. This, I was told, used to involve gifts of livestock in the old days, but now a new practice has evolved in which the whole community contributes and a gift of cash is made. Interestingly, though generally frowned upon, love-marriages that involve the couple eloping are also not outside the local legal boundary. It’s just that when the couple returns after having spent a month or two in Gujarat, a panchayat is held and a formal announcement of marriage is made. The caveat is that the dowry amount levied for this love marriage is quite higher than the one expected for a normal marriage. By taking note of such exceptions in this way, the tribal custom ensures that even when the general law is broken, no hard feelings take root in the community for long.

There are many peculiar rituals that are only seen among specific communities. Tribals in Jhabua, for example, start the monsoon month by praying to Megh Baba (Indradev) for an entire night. Tribal chiefs, folk singers, tribal vaidyas, all of them spend the night singing, to welcome deities and ancestors, praying for a good rain. The night is spent singing folk songs (gaayna) and narrating folk tales of old kings and deities like Khani Raja, Bhola Ishwar (Shivji) and goddesses like Jahma Mata, Kusumar Mata. In the morning, a theekri (cart made of Palash tree’s bark) is taken around the village. Similarly in marriage functions, a whole night is spent inviting a great number of deities individually by name to the wedding.

The forest as the mother

The tribal villages, almost all of them have sacred groves which are called ‘Matavan’ (Mother forest). These are ecologically protected areas from where no trees can be cut down and no wood taken out, except for the annual religious rituals. All of these places have a shrine dedicated to the forest deities and the mother goddess where people go to pray for bountiful and healthy livestock. This prayer makes sense because the people are specially blessed in this regard. Almost everyone in the village has a few cows, bullocks, buffaloes, goats and hen. It is both economically and ecologically sustainable for them because in addition to their own substantial dietary intake, milk and milk-based products have a ready market. Other animal produce is also made use of in many ways. Manure is diverted to be used as a natural fertilizer in the fields. Gomutra is utilized in making a natural pesticide. People go to the matavan shrine for a safe delivery of their cattle, with an offering of a clay cow and a pateli (a wooden utensil used for cooking).

For the love of the ancestors

The tribals not only in Jhabua but in most tribal cultures all over India incorporate practices and rituals for veneration of ancestors. Among the tribes in Madhya Pradesh, there is a practice to erect stone tablets called Gaat’ (गात) in the memory of their ancestors. ‘Gaat’ means ‘body’ in the Bhil language. These tablets are embodiment of the spirits of people who die a premature unnatural death – suicide, death by accident, etc. The Gaats are supposed to bring their aatmas peace in the afterlife, by saving the soul from the suffering and agony that the body suffered.
These tablets are placed on the farm that the dead person owned and are worshipped on special occasions. On the Dipawali day, they are bathed and offered sacrifice of coconut and chicken.
The ancestor is depicted sitting on the horse, which is being led by a divine being. There’s sun and moon on either side. The etched figure that we see is actually a result of rubbing the stone off from around the figure, a very precise task, requiring great talent. The art of making these tablets is now lost. The newer ones are made of cement.

Conclusion
It can be concluded from this representative view into the cultural and religious life of a specific community how tribal communities are immersed in a rich and holistic cultural environment whose elements have always been an integral part of Indic civilization. Not only does a divide between Sanatana and tribal cultures not exist, the tribal cultures can actually show ways to others in which the Sanatana element can be holistically celebrated in our civilization. For such endeavour to be successful, further efforts need to be undertaken using their own language and methods to better understand the tribal customs and culture.
(Author is student of SIS JNU)

Post Views: 1,018
Bhagwan Birsa Munda: The Hijacking of an Identity
Understanding the Integral idea of Tribal Art and Culture