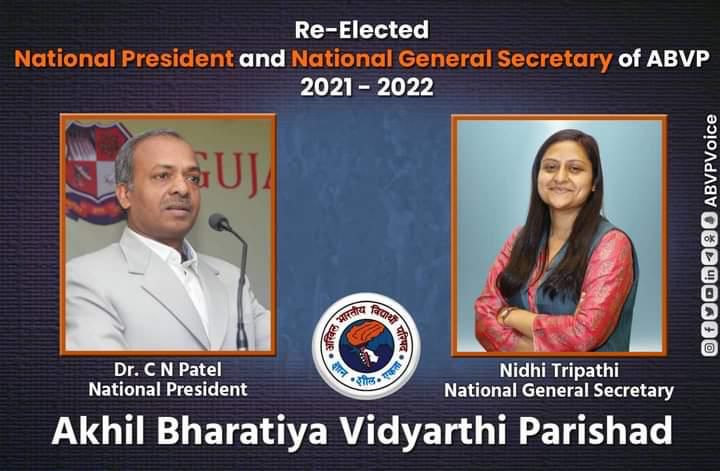 shares
Prof. Dr. Chhaganbhai Nanjibhai Patel (Gujarat) and  Nidhi Tripathi (Delhi) have been elected unopposed as National President and National General Secretary respectively of nation’s leading student organization Akhil Bharatiya Vidyarthi Parishad for the year 2021-22. This announcement was made today from the Central Office of ABVP in Mumbai.
According to the statement issued by the Election Officer Dr. Nagesh Thakur from the Central Office of ABVP, the tenure of both the posts will be of one year, and both the office bearers will assume their responsibility during the 66th National Conference of ABVP scheduled to be held in Jabalpur (Mahakoshal) on 24th, 25th, & 26th December 2021.
Dr. Chhaganbhai Nanjibhai Patel (CN Patel) hails from Mahesana district of Gujarat. He completed his PhD in Pharmacy. Presently, he is working as a Professor and the Principal of ‘Sarvajanik Pharmacy College’ in Mahesana. He is also Dean of the Faculty of Pharmacy and member of the Board of Governors of the Gujarat Technical University. He has published 42 International as well as more than 170 national level research papers and has guided more than 23 scholars on various research topics for PhD degree in pharmacy. He is also a member of the Pharmacy Council of India. Since his student life he is active in social field. He played an important role in making students, teachers and entrepreneurs in the pharmaceutical sector of Gujarat sensitive and supportive different sections of society. For the last 13 years, he has given direction to the dialogue about academic and social issues through the famous national level seminar “PharmaVision”. Since 1996 he is active as a teacher karyakarta serving roles from the city president to the president of Gujarat and later holing important responsibility of National Vice President. He has been elected as the National President of ABVP for this session (2021-22). He resides in Mahesana.
Sushri Nidhi Tripathi hails from Pratapgarh district of Uttar Pradesh. She has done BA from Allahabad University and MA, MPhil from Jawaharlal Nehru University. She continues to pursue PhD from JNU. She has been actively associated with ABVP since 2013. After holding various responsibilities in JNU unit, she represented ABVP as the Presidential Candidate for JNUSU in the year 2017. She actively participated in the students’ protest against the anti-national sloganeering that took place in JNU in 2016, and played an important role in taking the Mission Sahasi campaign undertaken by ABVP on national level. She represented our nation in Indian youth delegation to Sri Lanka organized by Ministry of Sports and Youth Affairs, Government of India. As a researcher in Sanskrit literature, she has presented papers in various national and international conferences. A vociferous spokesperson of nationalism and active on issues of students’ interests, she is former National Secretary of ABVP. She has been re-elected as the National General Secretary of ABVP for this session (2021-22). She resides in Delhi.
Post Views: 1,113
READ  न पुरूष, न महिला बल्कि परिषद का एक कार्यकर्ता राष्ट्रीय महामंत्री बना है : निधि त्रिपाठी
पराक्रम के 50 वर्ष
Karthikeyan Ganesan of Villupuram (Tamil Nadu) awarded the prestigious Prof. Yeshwantrao Kelkar Youth Award 2021