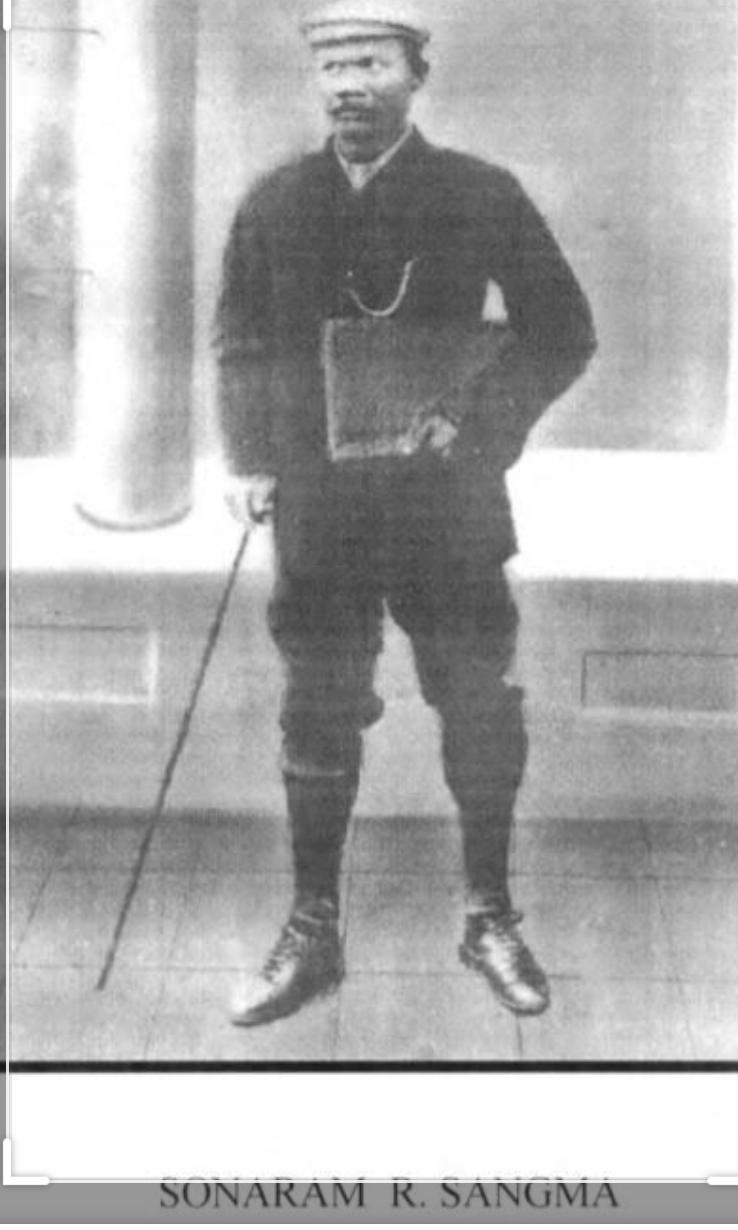 The rule of East India Company (EIC) and the British Crown in Indian history was marked by several fundamental and structural changes in the Indian society; in both core as well as geographically peripheral areas, where the British administration was not well consolidated. The ever increasing demand for raw material, propelled by the Industrial revolution of the nineteenth century, compelled the Britishers to push for the Commercialization of Agriculture in their colonies, including India. Unlike in the North and South Americas, the British couldn’t obliterate the indigenous people from their homelands in India. This is due to the continuous efforts of the local tribes, who waged relentless battles against the Britishers, to protect their traditional ways of life. This article is an attempt to highlight one such struggle in the north east of India, by the Garo tribe under the leadership of Nationalist Sonaram R. Sangma against the British-Zamindar administration nexus.

The Britishers had smartly engineered a framework to achieve their objective of the commercialization of agriculture policy. The colonial policies of natural resources management can be categorised into three groups: 1) primacy of commercial agriculture over Subsistence agriculture system; 2) de-legitimisation of the community resources, and 3) the abandoning of restraint on resource exploitation. These policies inadvertently resulted in a paradigm shift in the rural socio-economic set up. These policies took the form of increasing land settlements; changes from traditional to commercial farming system; preparation and implementation of cadastral map; and demarcating territory on the lines of earthen mounds. The cadastral map and survey prepared by British became the best weapon to execute their plans in resource extraction from the whole country in general and North Eastern India in particular (Kumar, 2005). This changed the fundamental structure of existing land and forest boundaries stripping the natives of their cultural rights, traditional practices and hence, source of livelihood.

The foreign control over the land use with new forms of resource management, coupled with various grievances led to the discontentment all over the colonial India. In the north east, the Garo tribe under the popular leadership of Sonaram R. Sangma continued to protest against the unjustified colonial policies, the oppression of the Zamindars, and the colonial order in general. The Garos started struggle against the foreign oppression as far back as the early 19th century. The  general discontentment of Garos was directed against the natural resource management based on expropriation and encroachment of Garo lands, reservation of forests denying them their rights to collect forest produce, imposition of rent, forced labour (begar) and the infringement of the customary rights (Kumar, 2005). Traditional leaders like Nokmas, Laskars and clan leaders played important role in mass mobilization.

However, under the leadership of Sonaram R. Sangma, in the last decades of 19th century, the movement was carried on a large scale with the extensive coverage and more vigour. He was the first person among the Garos in colonial Assam to raise the consciousness among its people. He brought together the Garos of hills and plains under one platform, despite having various grievances. He was an Ex-PWD employee, vaccination officer and a cattle skin trader before becoming a leader of anti colonial struggles. His work in the PWD sector facilitated him to travel across the region and learn about the various grievances of his tribe. He initially joined the movement taking up four cases the Nazarana land case, Habraghat Pargana case, Reservation of forest and abolition of the Begar System. The main objective of his movement was to reclaim back the land of the Garos from the clutches of Zamindars and British.

In 1821, the British took control over the situation and in 1831 David Scott, made an agreement with the 18 Nokmas and granted rent free lands or Bibhagnama lands. Gradually, the lands of Garos in the neighbouring areas were brought under the British rule and were required to pay a tribute called Nazar to the political agent in the Goalpara. The main motive of British interest in Garo hills was on its rich forest resources, minerals and specifically prospects of cotton that could become a potential source of supply to Manchester (Bhatacharjee, 1975). According to the British accounts, cotton was cultivated on commercial basis by Garos and was actively traded even in the Garo frontier markets or hats. The British supplied quality cotton seeds to Garo cultivators, and the produce was later exported to England, even Japan and Germany.  Cotton was the medium of exchange in the Barter system and when British introduced currency in 1838 the Garos refused to accept and resisted strongly. To simplify the administrative process as well as to exercise greater control over Garo population, the British divided them on the basis of geographical-spatial location and tax relations into four categories namely: Bemalua, Nazarana, Zamindari and Namdani. This division was basically to break the unity of the community and it led to the huge discontentment against the British.

Parallel to the land settlements and cadastral demarcations like unpopular Kelso and Beckett line which attempt to define the boundaries, British also introduced and passed regulations on the forest reservation. These developments were a clear violation of Garo customary and traditional rights and aggravated the agrarian population. Garos are dependent on the forest economy as they mainly practice hunting, shifting cultivation, cattle grazing and performance of rituals in the forest. The British asserted that all wastelands in the hill districts are at government’s disposal and the compensation was not made except to the few cultivating lands. Between 1883 and 1895 a forest area of 139 sq. miles was reserved and the houses of Garo dwellers were demolished, who were compensated with meagre amounts as an act of grace. Jhumming cultivation, the principal mode of agricultural production was made illegal. Since, Jhumming was basically a subsistence type of cultivation and not commercial, the Britishers preferred a pattern of sedentary agriculture. In the words of Badan-Powel at the Forest conference held in Allahabad in 1874, “shifting cultivation is an inferior method of cultivation and it is as evil as the practice of Sati system and should be prohibited to protect the forest reserves,” (Malik, 2003). And right to access forest resource was prohibited or by paying a fee.

After the simplification and organization of the control of natural resources, the British introduced Begar system or the impressed labour. It became a legal method to recruit labour and transformed them into the servants of state. The labourers were recruited to construct the roads and carry the loads and baggage of British without any remuneration. The Garos initially protested and stood united against this inhumane system and asked fellow Garos, who are engaged in to these system, to not cooperate with the British. In 1886, District commissioner asked them to surrender but they did not surrender. Subsequently, British used forced and burned down the Garo villages resulting in collapsed of the unity among them.

The unsettled question of Kelso and Becket line was brought up during 1899-1900 when Zamindar of Bijni encroached upon Garo lands and illegally marked its territory. The situation aggravated when Fongfong Laskar removed the demarcation, he was sentenced to imprisonment in 1901. At this important juncture, Sonaram entered the picture of the movement, taking up the various cases of Garo cause. He personally learned the intentions when he found the file of land documents indicating the British-Zamindars nexus in encroaching and occupying illegally the lands of Garos. He took up the case of the Nazarana and Bibhagnama lands and Harbhaghat pargana. He led the movement to reclaim back the lost lands of Garos and asserted that Garos are the original owners and only Nokmas (Garo village headman ) have the right to impose tax. He also instigated the Garos who have Bibhagnama land to register them. He made a huge claim on Habraghat pargana, that it originally belonged to Garos.

In 1901 he arranged a protest of about 700 people and marched from Habraghat to Dalgoma ghat and constructed encampment of huts and posted notices forbidding cultivators to pay a rent to the Zamindars. He and the ring leaders were arrested and sentenced to imprisonment till 1904. After the release, he resumed the agitation and submitted a memorandum to the Governor General of India stating that the existing arrangement is based on an absurd decision, where the two parties to the agreement decide on third person’s property which is totally unjust in any civilised country. But the government remained unresponsive to his questions. However, during the period of the movement the Garo leaders stopped paying rent to the Zamindars and revived the Nokma rent from non-Garo cultivators with an objective to restore the Garo Raj and also help Sonaram to fight a legal battle. It is said that the amount collected as a donation was 1lakh that assisted him to pay for a legal battle against the British and Zamindars.

Sonaram in order to widen its operations and accelerate the movement against the British appealed to the Garos living in the hills to secure for themselves the reserve forest lands and abolished the begar system. For the cause of reserved forest in Garo hills, Sonaram in 1906 submitted a memorandum with one lakh signatures to the Viceroy and Governor General of India. He brought together the Garos from hills and plains under one platform. The British as a result of these set up an enquiry commission to make a report under J.C Arbuthnott, the commissioner of Surma valley in 1906-1907. The investigation was carried out rigorously on all the matters. However, in 1908 the decision furnished by the Secretary of the British India was not in the favour of the Garos. The decision went in favour of Bijni Zamindars and Beckett line was retained.

Though Sonaram was not successful in all his claims, he was able to retain Nazarana mahals to the Garos, made British agree to pay compensation if further forest reservation takes place. The Begar system may not have been abolished but they agreed to change it to paid work. His claim on Habraghat was not entertained but he nevertheless, established the fact with clear evidence that Habraghat was once the property of Garos which has been cherished till the present times.  Reclamation of the lost Garo lands was termed as the idiosyncrasy nature of the indigenous by the British.

Sonaram’s efforts may not have yield many productive results, but his commitment towards community cause was remarkable. He became the tall figure among the Garos and his legacy lives on. In his last days he continued his struggle and was busy shuttling Dhubri, Gauhati and Calcutta for consultation with his lawyers. He was the man of Gandhian nature and can be regarded as one of the first Indian leaders who practiced and popularised non-violent methods of protest among his people. The strategy he followed to battle against the British was purely through legal, constitutional and democratic means by writing many petitions, submitting memorandums to the British.

Hence, it can be argued without doubt, that the indigenous tribes formed the first line of defence, against the intrusive and destructive colonial policies that attempted to change the socio-economic structure of the tribal societies for commercial benefits. The struggle by the Garo people in the north eastern region stands to testify this. They resisted the illegal and unjust policies of the foreign rulers, to force them to abandon their traditional way of living and their customary rights over ancestral lands which they considered sacred. In this fight, although many people of various standing came together, key role played by the nationalist leader, Sonaram has been remarkable in raising the consciousness of the people about their rights and regards a mention in the mainstream history books on Indian National Movement.